Tata Still On Track With Plan To Launch 10 EVs In 5 Years; Will Launch Up To 2 EVs Every Year 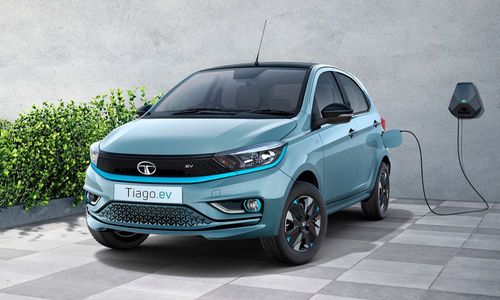 Tata Motors has reaffirmed its electric vehicle offensive for India. The company, which already has the Nexon EV and Tigor EV on sale in India recently launched its smallest electric passenger car, the Tiago EV, and the carmaker plans to launch 1 to 2 EVs every year going forward.

Speaking with car&bike on the sidelines of the media drive for Tiago EV, Shailesh Chandra, Managing Director Tata Motors Passenger Vehicles and Tata Passenger Electric Mobility Limited said that the company is well on track to launch 10 electric vehicles over the next 5 years.

Talking about the company’s EV strategy Chandra said, “We have already spoken about several other products. We are going to launch 10 new products (EVs) over the next 5 years, and we are clear about the sequence of launches.” He further added, “We plan to launch 1 or 2 electric vehicles every year going forward. We have decided on a sequence for the launches, as you have seen first it was SUV, then a sedan and now a hatch.”

Tata Motors currently has four electric vehicles on offer in India, three in the passenger vehicle space – Nexon EV, Tigor EV and Tiago EV, and one for the fleet segment, the Xpres-T. Deliveries for the new Tiago EV will commence from January 2023.

As for the upcoming EVs, the company is already considering bringing in electric derivatives of its other existing models, like the Tata Punch and the Altroz. Then there are electric vehicles that will be built ground up on dedicated EV platforms like the production version of Curvv and Avinya concepts. In fact, Tata Motors is weighing the options to revive the Sierra moniker with an all-new electric SUV.

When asked about some of the upcoming EVs for India, Chandra said that he cannot reveal much about that as the company would like to maintain the suspense and keep the market excited. He said, “Like when we were going to launch the Tiago EV, people were not expecting it, they expected something else. So, we want to keep giving such surprises, and our aim with our upcoming launches is to bring in cars that can make electric vehicles a mainstream choice.”

Tata Motors is currently the largest producer and seller of electric cars in India, with a commanding market share of 87 per cent right now. So far, over 50,000 Tata EVs have been rolled out from the plant, in the personal and fleet segment.