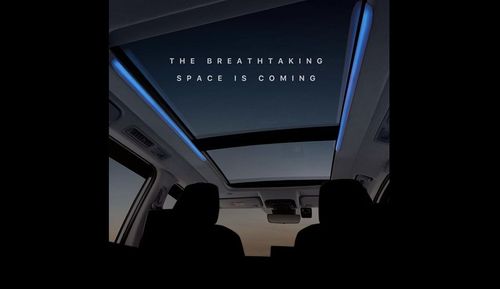 Toyota is all set to unveil the new Innova Hycross MPV this month. While the India debut is slated to take place on November 25, the MPV will be making its global debut in Indonesia first, on November 21, 2022. Ahead of the global reveal, Toyota Indonesia has released a new teaser of the Innova Hycross giving us a glimpse of the MPV’s cabin, which will now come with a large panoramic sunroof. In addition to that, the teaser also shows that the MPV will also come with repositioned roof-mounted air-con vents and ambient lighting.

In terms of other features, the Toyota Innova Hycross is expected to come with a completely new interior with a larger infotainment system coupled with a 360-degree camera, captain seats for rear passengers, a panoramic sunroof, and wireless charging, among others. We also expect Toyota to offer improved creature comforts and safety features.

The upcoming Toyota Innova Hycross will be based on the company’s modular TNGA-C platform and will be underpinned by monocoque chassis and a front-wheel-drive layout. The current Innova Crysta is built on a ladder-frame construction and comes with a rear-wheel-drive drivetrain layout. The MPV will also come with new engine options – a regular petrol powertrain (possibly featuring a mild-hybrid system) and a strong hybrid petrol engine. The Urban Cruiser Hyryder gets a similar setup, however, the Innova Hycross is expected to get more powerful 2.0-litre units.

Toyota Innova Hycross will be based on the company’s modular TNGA-C platform and will be underpinned by monocoque chassis and a front-wheel-drive layout.

We expect the company to officially launch the Toyota Innova Hycross next year, possibly at the 2023 Auto Expo, should the company participate. Upon launch, the new Innova Hycross is likely to be positioned above the Innova Crysta.