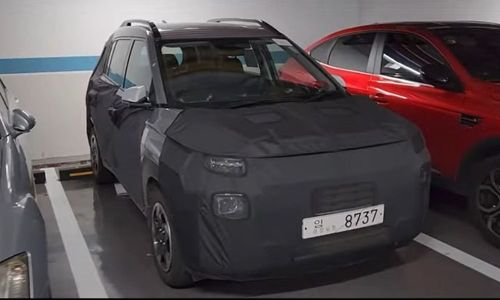 Hyundai has started testing another subcompact SUV in its home market, South Korea. The new SUV is expected to be positioned above the Casper but below the Venue whenever it hits the market. The heavily camouflaged test mule revealed little as to the model’s styling details though a closer look at the details revealed that it will be a different model to the Casper.

The test mule retains the split headlamps set-up seen on models such as the Venue and Casper though unlike its Korea-specific city car, the new SUV seems to get a more conventional design. The DRL pattern is unique to the model while the main light cluster lower down is more squared out as compared to the Casper while the grille design too looks to have evolved from the latter.

Down the sides, the new SUV keeps the boxy and upright proportions. Compared to the Casper the glasshouse too is changed with a slimmer B-pillar and the new rear quarter window. The squared-out wheel arches wear prominent cladding while at the back the tail-lamp design is more conventional than its Korea-specific sibling.

In terms of size the new SUV will be larger than the Casper as well as sitting on a longer wheelbase. However it will still be smaller than the Venue subcompact SUV.

Few details are available as to the engine and platform of the new model though it is also likely to sit on Hyundai’s K1 platform.

Coming to the Indian market, while Hyundai is reportedly keen to bring in a small SUV to the market, which sits below the Venue and can be a rival to the Tata Punch, which has so far done very well, unhindered by a rival in its segment. However with the launch of the Casper already ruled out for markets outside South Korea it remains to be seen if this upcoming model could be considered for the Indian market.