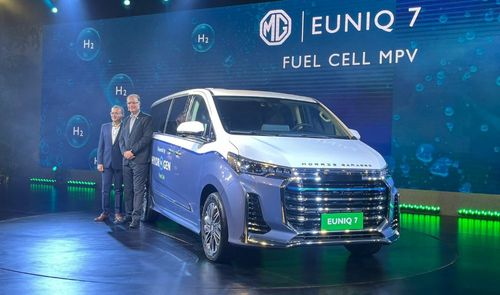 While MG ended day 1 with the launch of the 2023 Hector in India. Come to day 2 and the company revealed an alternatively fueled MPV to the Indian public. Badged the Euniq 7, the large MPV showcased MG’s developments emissions-free mobility with the vehicle featuring a hydrogen fuel cell and electric drivetrain.

The 5-metre-long MPV features the third generation of MG’s fuel cell technology with the company having developed its first prototype of the system in 2001. The latest system called Prome P390 gets a high-durability fuel cell offering high power density and excellent environment adaptability being able to operate in a temperature range of between 95 degrees and -30 degrees Celsius.

MG says that the fuel cell can supply up to 92 Kw of power with an efficiency of up to 60 per cent. MG additionally said that the system in the Wuniq 7 also worked as an air purifier able to filter out impurities from the air equivalent to 150 adults breathing in one hour.

Speaking of the MPV, the Euniq 7 is an international model retailed in some global markets under the Maxxus brand (MG’s sister brand under SAIC). The nose is dominated by a tall and wide grille extending from the edge of the bonnet down to a small airdam at the base of the bumper. The upper edges of the grille flow into sleek headlamps with large air vents positioned below on the bumper. Moving to the sides, the MPV’s van-like design become more apparent with rear occupants accessing the cabin via sliding doors and a near vertical tail-gate. The rear design is quite staid with a simple tail-lamp design a a band of chrome running across the tail-gate.

The cabin design too is simplistic and modern with a highest free-standing central touchscreen sitting atop the centre console and the use of soft-touch materials on the dashboard. The MPV features a 7-seat layout (2+2+3) with adjustable captain seats in the second row.

The Euniq 7 is purely a technological showcase for the brand in India with no plans to bring the MPV to India.