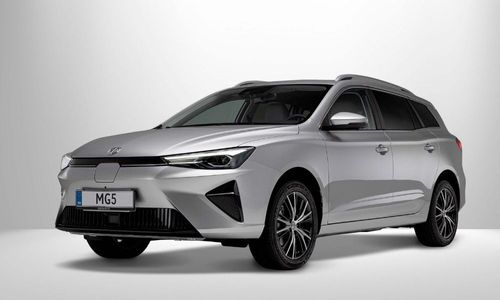 MG Motor India is set to showcase several models from its global line-up at the 2023 Auto Expo. The carmaker had previously confirmed that it would be showcasing the MG 4 electric hatchback at the show and now the carmaker has also teased its new MG 5 electric estate ahead of its Auto Expo debut.

The MG5 Estate made its European debut in the second half of 2020 with the model receiving a facelift in mid-2021. While known as the MG5 in Europe, the model originally debut in China in 2017 manufactured by MG’s sister brand Roewe as the Ei5.

The latest iteration of the MG5 brings with it a more streamlined design than the previous model. The nose is characterised by sleek sweptback headlamps flanking a narrow closed-off grille and a clean bumper featuring a central air dam and angular vents on the sides. The clean design carries to the side with a clean flowing shoulder line extending to the rear. The rear is characterised by a clean uncluttered bumper, a raked rear windscreen and large tail lamps with Y-shaped LED light guides.

Inside, the cabin features a layered dashboard design with the use of soft-touch materials and a free-standing central touchscreen.

It’s still not certain if MG will launch the MG 5 in India sometime in the future given that the estate body style has not particularly gained traction in the Indian market, even in the past.