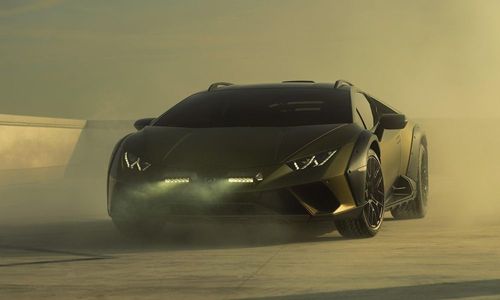 Lamborghini has released the first official images of the production Huracan Sterrato ahead of its debut on November 30. The high-riding Huracan is expected to be the last pure combustion engine model to be revealed by the Italian supercar company with future models to feature some degree of electrification.

Previously seen camouflaged as part of Lamborghini’s teaser campaign, the production Sterrato remains unchanged from the units used in the teasers save for the deletion of the roof racks. The Sterrato sits notably higher than the standard Huracan with the model also getting its own bespoke front and rear bumpers, wheel arch extensions and side skirt.

Up front, the bumper gets a pair of auxiliary lights placed on either side of the Lamborghini insignia while down the sides the wheel arches now wear prominent extensions with pilot lights. Also visible are roof rails while an air scoop – similar to on the STO – sits just behind the passenger compartment. The rear bumper too has been reworked to help improve departure angles.

Auxiliary lights, roof rails and an air scoop round out the looks.

Lamborghini hasn’t revealed the interior or technical specifications for the Sterrato though we know the supercar will be powered by the same V10 engine as the standard Huracan. Power will be sent to all four wheels as standard.