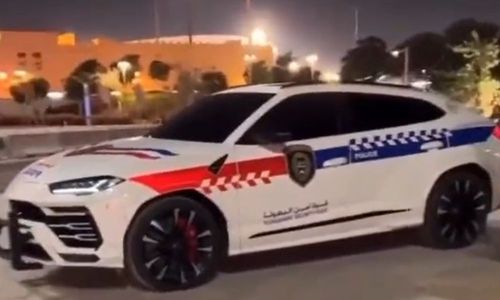 Exotic cars are nothing new to the Qatari police force, and the latest to join is a $230,000 Lamborghini Urus super SUV, dressed in a distinctive white livery with red and blue stripes, being utilised by the Tournament Security Force for the current 2022 FIFA World Cup. At present, the Qatar Police boasts a massive fleet of Porsche Panameras and Cayennes, and even a Lamborghini Gallardo in its security fleet and the new Urus just adds much more charisma to the convoy.

However, Qatar isn’t the only country that has added a Lamborghini Urus to its police force. Back in March, the Dubai police department boosted its enormous fleet of exotic police cars by adding a Urus, which, together with the G-Wagen, maybe the most practical police car in the dazzling line-up. Dubai’s famed police fleet comprises everything from extremely stylish Ferraris to ultra-luxurious Rolls-Royce and even Bentleys.

The Lamborghini Urus just received a mid-cycle facelift, resulting in a two-variant line-up that comprises an entry-level Urus S and a track-focused urus Performante on top. Both models are powered by the same 4.0-litre V8 with 666 bhp. The Urus Performante has a top speed of 306 kmph and can accelerate from 0 to 100 kmph in 3.3 seconds.