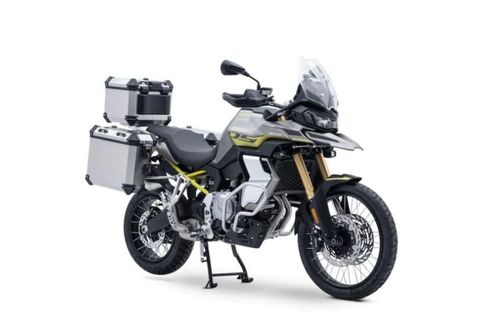 Chinese motorcycle brand Voge has unveiled its flagship concept, the Voge 900DS, which will be offered as a premium adventure touring model once production gets underway. Voge is the export brand of Chinese motorcycle manufacturer Loncin, and the 900 DS concept uses the engine of the BMW F 850 GS. BMW Motorrad sources its engines for its 850 and 900 models from Loncin, and the 900DS is Loncin’s own iteration of BMW’s middleweight ADV.

Voge is the overseas brand of Chinese manufacturer Loncin which makes engines for BMW Motorrad. The Voge 900DS is Loncin’s own iteration based on the 895 cc parallel-twin used in the BMW F 900 R.

The 895 cc, liquid-cooled, parallel-twin engine is the one Loncin supplies to BMW, and used in the F 900 R, and has an ouput of around 95 bhp at 8,250 rpm and 87 Nm of peak torque at 6,250 rpm. A six-speed gearbox with bi-directional quickshifter is standard, as well as an integrated slipper clutch.

The Voge 900DS will come with a long list of features, including ride-by-wire, multiple riding modes, traction control and more.

A large, full-colour TFT display displays all relevant information, and optional features include cruise control, heated grips and saddle, and a full set of aluminium luggage, with side panniers and a top case, which can be acquired as additional extras. The bike features fully adjustable forks, with standard dual-channel ABS, and brakes feature Brembo hardware.

The Voge 900DS looks set to take the fight to established models in the middleweight adventure segment.

The 21-inch front and 17-inch rear wire-spoke wheel combination underscores the off-road focused intent of this middleweight adventure bike. The design though is more Triumph than BMW, even though the powerplant is shared with BMW Motorrad.

Voge is expected to introduce the 900DS to take on established middleweight adventure bikes like the Triumph Tiger 900 Rally.

In China, Loncin Industrial Group is based in Chongqing and builds motorcycles and scooters of up to 250 cc, tricycles for passenger and goods transport and electric scooters under its own brand name. Loncin has created the Voge brand for export markets, particularly to target European countries.