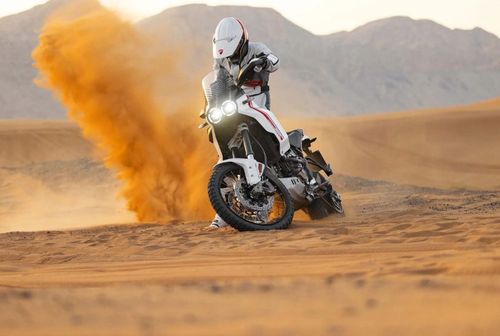 The Ducati DesertX has been a hotly anticipated model, in a market where there are genuine takers for off-road oriented adventure motorcycle, which will be on sale alongside the Ducati Multistrada V2. Its design is inspired by the old Cagiva Elefant motorcycle of the ‘90s, which had a storied Paris Dakar legacy as well. The DesertX looks the part of an adventure motorcycle, with the twin round LED headlights, tall windscreen and a lean, mean look.

The Desert X is powered by a 937 cc, Testastretta 11-degree L-twin engine which develops 108 bhp at 9,250 rpm and 92 Nm of peak torque at 6,500 rpm. The motor is paired with a 6-speed gearbox with a wide ratio set-up with shorter first and second gears that aid in crawling over rough terrain, while a taller sixth gear offers better touring ability.

The Desert X is a more off-road focussed ADV than the Multistrada V2, with which it shares its 937 cc L-twin engine. Suspension duties are handled by Kayaba with 46 mm forks at the front with 230 mm of travel. The rear gets a monoshock with 220 mm of travel.

The seat height on the bike is a whopping 875 mm with 250 mm of ground clearance that does make it a tall order. Braking performance comes from Brembo with four-piston M50 calipers with dual discs at the front that uses an axial master cylinder. The motorcycle runs on a 21-inch front and 18-inch rear wheel combination, with tubeless Pirelli Scorpion Rally STR tyres, mounted on wire spoke wheels.

The Ducati Desert X gets six riding modes, including Enduro and Rally modes. There’s also cornering ABS that can be completely turned off in the two off-road specific riding modes. All controls can be accessed using the 5-inch TFT screen while the electronic aids on the motorcycle include the IMU-assisted traction control, wheelie control, engine brake control, cruise control and a bi-directional quickshifter. Ducati claims a kerb weight of 223 kg on the DesertX.

It goes head to head against the Triumph Tiger 900 Rally. Now, that is a rather tasty thought!