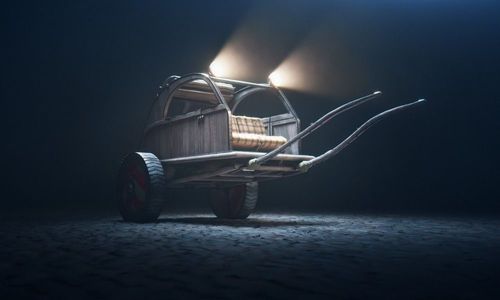 In the latest collaboration between movie makers and car manufacturers, Citroen has teamed up with Pathé, Trésor Films and the Editions Albert René to unveil a chariot based on the iconic 2CV. The collaboration is inspired by the upcoming French movie Astérix & Obélix: The Middle Kingdom which will enter cinemas next year.

The movie is an adaptation of a French comic created in 1959 which has to date gone on to spawn over 15 movies and cartoons. For those who don’t know the series rounds around the protagonists of the same name living in the last free village of Gaul surrounded by Romans and their adventures and exploits.

Sticking to the time period-inspired look, the main body of the chariot while styled like the cab of the 2CV is made entirely of oak. The roof is made from canvas while the wheels are repurposed shields inspired from ones used by the Gauls in the series. The suspension is meanwhile made of “boar’s stomach” while the roof-mounted headlights are repurposed gallic helmets powered by fireflies who have tasted “the magic potion” (a reference to the magic potion brewed by the gallic druid Getafix that gives the Gauls superhuman strength in the series).

The concept wears the new Citroen logo at the back made completely out of metal while the shields used on the wheels too feature the Double Chevron.

The Chariot will be featured in the upcoming film including being physically present and as an advertisement accompanied my the message, “the 2CV, an incredible chariot made in Gaul, pulled by 2 horses.”