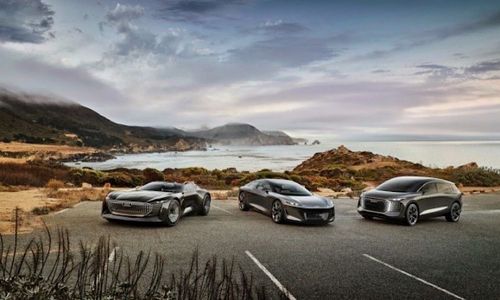 The e-tron name has been around for more than a decade. If you followed our previous article, you’d know that the name first made its public appearance in 2009 with an electric R8-based concept and a number of plug-in hybrid models from the company. The first true production EV wearing the e-tron name only arrived in 2019 with the e-tron SUV with the latest line-up more recently being rounded out with the Q4 e-tron. However, the hits are set to keep on coming with plenty of new ‘e-tron’ models and EV technologies still under development.

Coming up next will be Audi’s first dedicated BEV based on an all-new electric architecture co-developed with Porsche – the e-tron (MLB Evo), e-tron GT (Porsche J1) and Q4 e-tron (MEB) each came underpinned by existing platforms. The PPE or Premium Platform Electric is a new-gen EV platform that will allow future electric Audis to be more powerful, more efficient and even faster charging. The first model on this platform is set to be the A6 e-tron, a model that Audi has previously teased in concept form in both sedan and Avant (estate) body styles.

The new PPE platform will be scalable in nature allowing Audi to shrink or expand the wheelbase ranging from 2890 mm up to 3080 mm with axle track and ride height also being scalable. Charging times and range too will benefit with an 800V architecture and support for higher DC fast charging standard. Additionally, the PPE architecture will allow Audi and the rest of the VW Group to cover multiple segments in the premium space even overlapping the MEB and J1 platforms on either end both in segments, costs and performance. Other benefits will include greater production capacity, similar to the VW Group’s MEB platform, the J1 platform is designed for more limited applications.

Range is expected to see major benefits over Audi’s existing EV platforms with the A6 e-tron claimed to offer over 700 km of range.

Also in the works is the Q6 e-tron. Previewed by the Urbansphere concept, the Q6 e-tron will also be based on the PPE architecture with the model expected to arrive following the A6 e-tron. What will follow will be Audi’s long talked about Project Artemis. Project Artemis will be Audi’s future flagship for the all-electric age with the Grandshpere concept from 2021 providing a hint at what the upcoming EV could look like. The model will essentially be the flagship to replace the Audi A8 going forward and could carry forward the e-tron naming scheme. The Grandsphere featured a 120 kWh battery module, which combined with two electric motors, one on each axle offered about 710 bhp and 960 Nm of peak torque and a range of up to 750 km on a single charge.

Audi also showcased a two-door GT-concept previewing Skysphere concept that allowed drivers to adjust the vehicle’s length at the touch of a button and would feature a battery pack rated at over 80 kWh. A fourth sphere concept, the high-riding Activesphere, set to be unveiled in January 2023. Both too could preview future e-tron models from the brand. So there’s still more to look forward to.

High-riding Activesphere concept too could preview a future production EV.

Going forward the current VW Group MEB and Audi’s upcoming PPE architectures are expected to make way for a new SSP architecture. The new platform will be unique in a way that it will be scalable across all models not just of Audi but the entire VW Group.